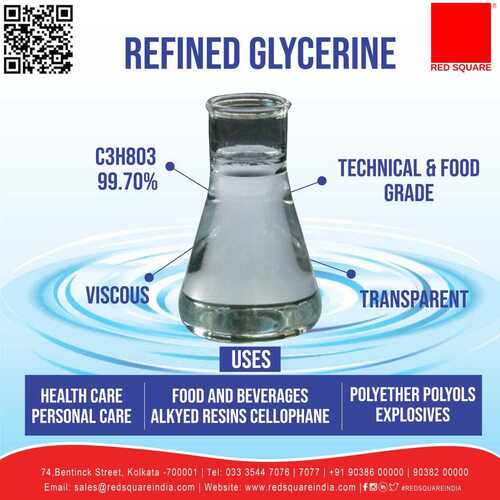 Glycerol also called glycerine or glycerine (see spelling differences) is a simple polyol compound. It is colourless andodourless, sweet-tasting viscous liquid, non-toxic and it is hygroscopic. It has well solublizer, plasticizer, moisturizing and preserving agent.

Pharma Grade Glycerine is one of the most widely used ingredients in medical world, second only to water.Glycerine is used in , pharmaceutical and personal care preparations, often as a means of improving smoothness,providing lubrication, and as a humectant. In solid dosage forms like tablets,glycerine is used as a tablet holding agent. Medicine capsules are also plasticised with glycerine because it is non-toxic and can be consumed. Cough Syrup contains glycerine because of sweet taste and viscosity. This is why they are thick & sweet tasting. It is found in allergen immuno therapies, elixirs,expectorants, toothpaste, mouthwashes and water-based personal lubricants.

Food Grade As a , glycerine is labelled as E number E422. The humectant characteristics & the sweet taste of glycerine gives it a large variety of uses within the food industry where it behaves as a moistening agent, emulsifier, sweetener & preservative. Glycerine is used in food industry as an artificial sweetener. As a , it has approximately 27 kilocalories per teaspoon (sugar has 20) and in fact, it's considered to be 60%as sweet as other refined sugar (sucrose) with a lower calorie percentage per tea spoon. It is added to ice cream and most processed foods. It is used as an emulsifier in the food industry to prevent the separation of oil & water in a mixture by acting as an intermediary which help in improves texture,moistness, fluffiness & shelf life. Taken orally (often mixed with fruit juice to reduce its sweet taste). Glycerine is a high energy , sweet tasting liquid which can be added to feed in order to provide an energy boost to dairy cows.

CP (Chemically Pure) Grade  It has the best effect when its component in a cosmetic product like  products, shaving cream, hair care products, from skincare to make up products, like, mascara and lipstick, etc. Glycerine is being included in gums & resins for protective coatings, which have particular use in automotive industry. In automobile radiator for cooling system. In printing industry it is used to make ink. It is one of the major raw materials for the manufacture of polyols for flexible foams, and to a lesser extent rigid polyurethane foams. Used as Plasticizer in cellophane. It is also used widely in the paints and paper industries as well as being the main ingredient in the manufacture of e-liquids and agricultural feed additives.

Thank You for your valuable time. We have received your details and will get back to you shortly.

×
Get a price quote for Refined Glycerine
×

"We are accepting above 1000KG order value."
Back to Top
AMIT INTERNATIONAL All Rights Reserved.(Terms of Use)
Developed and Managed by Infocom Network Private Limited.